Kate Elizabeth Robbins (born 21 August 1958 in Margate, Kent, England) is an English actress, comedian, singer and songwriter. She came to prominence in the early 1980s when she scored a No. 2 hit on the UK Charts with the song “More Than in Love”, while she was appearing in the television soap opera Crossroads. She went on to become a prolific voice actress, most notably for nine years with the satirical show Spitting Image. 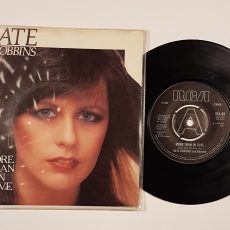